A little about Debbi... 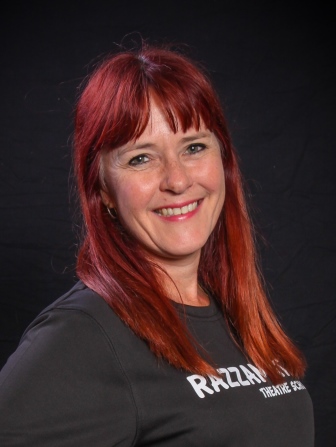 Debbi Ledwith is an accomplished performer, teacher and singer, holding a Performing Arts degree from the Royal Welsh College of Music and Drama. Debbi also studied Music Theatre at the Royal Academy of Music and then enjoyed several years as a professional performer across a range of varied roles. She has appeared on the London stage and developed a number of roles in new musicals. For 13 years Debbi was the lead singer of award-winning duo Silhouette.

Debbi is currently the Head of Performing Arts at an arts specialist school in Basingstoke, a job she’s held since 2000 and still loves today. Working with young performers is her passion, making her move into Razzamataz a natural next step when the opportunity arose in early 2015.

“When I discovered Razzamataz Theatre Schools I was immensely excited about the possibilities. I love sowing into the next generation of performers, watching them grow in confidence and develop important creative skills which can be used in many ways throughout life. It’s an honour to be a part of their journey, and so rewarding.

There’s one recurring message I hear from the children who join us which sums it up beautifully – they’re enthralled with the experience and there’s no looking back!”

We would love to help your child enjoy the amazing Razzamataz experience. Take the first step by enrolling them for a taster session!

View all of our reviews on Google and Facebook!

Surrounded by a family of dancers and dance teachers, Ayeisha was taught to dance as soon as she could stand. As a child she studied Ballet, Tap, Modern, Contemporary and Street Dance, then continued her training at Laines Theatre Arts and trained as a teacher under Paddy Hurlings in Portsmouth. Ayeisha began her professional career with commercial companies such as Nike and Disneyland Paris before deciding to take an alternative route. She performs with Vaudeville Cabarets at festivals around the world and runs a small circus where she is the principal performer, choreographer and teacher. As well as dance, she also performs acrobalance, fire-hoop, fire fans and fire staff, and plays a variety of instruments and sings within a band. Ayeisha is incredibly excited to be teaching at Razz and hopes to impart some of her passion to her students.

Sasha has been dancing and performing for the past 20 years. Starting her training locally at Steps Ahead Dance School and NCYDC, she then moved on to the University of Winchester obtaining a degree in Choreography and Dance. She has taught a variety of different styles and age groups over the years, mostly with Nomads Musical Theatre Society, choreographing large musicals such as Grease, Summer Holiday and Oklahoma. In her spare time Sasha loves treading the boards with Nomads herself and experiencing all the backstage work that goes in to putting on local theatre.
Sasha joined the team in 2018 and is really enjoying the opportunity to work with such a talented group of students.

Shauna Saunders is a mum of 2 beautiful girls and has been involved in musical theatre throughout her life. As well as having a background as a director, she has been onstage performing in musicals such as The Adventures of Sherlock Holmes, Sweeney Todd, Anything Goes plus many more. Shauna has a background in child care ranging from early years up to 18 years as well as training in special educational needs, teaching drama and an array of other subjects. Shauna joined the Razz Newbury Team in 2017 and really enjoys helping your children showcase their talents!

Kate has been a teacher of drama, director and freelance workshopper for a very long time. She started out in youth theatre and progressed to training in Dramatic Arts at Bretton Hall College, the prestigious outpost of Leeds University, where she specialised in writing and directing.
Since then she has worked in schools, colleges and small scale touring theatre. Kate currently teaches Drama at The Vyne School in Basingstoke.
She really enjoys working at Razzamataz as it is a pleasure to watch young people who want to learn, grow and develop in their performance skills.

Emma has been singing, ever since she can remember and began teaching singing in 2014.
She studied Performing Arts at school and college and then took a gap year to perform for a children’s theatre company. During this time she also took her London College of Music Grade 8 singing exam and started teaching.

Emma started as Razzamataz’s first singing teacher whilst studying a BA Honours in Musical Theatre at the University of Winchester but left to complete her degree.

3 years later, Emma returned to our Razzamataz family once again and is delighted to be back, encouraging and boosting the confidence of her students.

Claire originally trained as a beauty therapist and her favourite part of beauty was where she could show her more creative side, by doing wedding or evening makeup and nails.
After having children, she decided to be a stay at home mum, which she absolutely loved. Both daughters attend Razz so Claire has been involved as a Razz mum since 2015.
Claire is very creative and organised with a strong nurturing side, so after spending the early years at home with her daughters, she decided to put her skills to best use and became a Teaching Assistant in 2016, where she started work at a local primary school.
Claire has recently taken on her own Minis classes and is really enjoying being part of the Razz team!